The invention of the reverse-acting grate is based on the fact that fuel ignites more easily when an already existing glowing mass is pushed back underneath it. Forward-acting grates cannot do this as they push the fuel mass, and thus also the glowing mass, towards the end of the grate with each grate movement.

Josef Martin took the logical decision to reverse the direction in which the grate moved - and the reverse-acting grate was born. He made it possible for the fuel to be transported onwards by constructing the grate so that it was sloped in the direction of transport, consequently allowing gravity to move the waste. The combined effect of gravity and reverse-acting motion resulted in the fuel being circulated and optimally burned out.

In numerous patents Josef Martin described various mechanical and technological solutions for this basic idea. Due to its unique characteristics, the new grate system could be used not only for high-grade fuels and coals but also for low-grade materials such as the high-ash content residues left over from mineral and brown coal mining.

From 1927 onwards, the company signed licensing agreements with several boiler manufacturers in Germany and other European countries. The licence holders obtained the right to use MARTIN reverse-acting grates for combusting coal in the steam boilers they designed and delivered. They also assumed responsibility for sales promotion, design of the boiler/furnace units, shop manufacture and erection of the grate structures. In addition to supplying the grate surface, MARTIN was responsible for the technical design, installation planning and construction of the grate-based systems.

In June 1928, the company was registered in Munich's commercial register of companies. 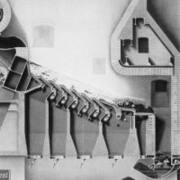 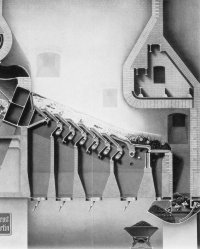