MARTIN started the second decade of the new century with a real bang, namely the presentation and launch in 2010 of the reverse-acting grate Vario at the IFAT trade fair in Munich. This grate system gives customers maximum flexibility in the choice of fuels but does not require the grate surface to be cooled. Maximum service life of the grate elements, excellent levels of availability and minimum wear are guaranteed. Moreover, all the advantages associated with the reverse-acting grate principle are completely retained. The first plant to be equipped with this grate system has been in commercial operation in Pozzilli (Italy) since 2007.

2011 saw the acquisition of an important contract for the expansion of the Roskilde plant in Denmark. The reverse-acting grate Vario was used for this contract and for the contract signed in 2010 for the Brista 2 plant in Sweden. The Vario grate was also used in Pilsen (Czech Republic) and Konin, our first order in Poland. The reverse-acting grate Vario has been chosen for 10 plants with a total of 14 lines, which are either in operation or under construction.

The order situation for our licence holder Sanfeng Covanta in China is very positive. Orders for more than 110 lines with a throughput of almost 60,000 t/day have been placed in China. A further highlight is the placement in 2014 of an order for Addis Ababa in Ethiopia. This is the first plant in Africa. The license agreement was extended by another 10 years at the end of 2014. At the start of 2013, we concluded an additional licence agreement in China with China Everbright.

2011 marked the 50th anniversary of our partnership with CNIM, which is very successful, for example in the United Kingdom. Contracts have been received from various operators for a total of 11 plants to date, all of which are turnkey facilities (including the civil part) equipped with our combustion system. The plants in question include those in Cardiff, Wilton, Beddington and Kemsley. Sharjah is the first contract awarded in the Emirates and includes both the construction and operation of the plant.

Covanta Energy has built the first plant in Canada, in Durham. Mitsubishi Heavy Industries Environmental & Chemical Engineering is supplying the 6th plant in Singapore and the Shanghai Laogang facility, the largest plant ever to be built at one time, with a throughput of 8 x 850 t/day.

2010 saw the foundation of MARTIN Services SAS, based in Lyon (France), to ensure the provision of aftersales services for French plants equipped with our combustion system. In 2011, we set up a workshop for repairing boiler parts in Matzingen (Switzerland), which has now reached full capacity. As a result, Martin Caldeiras was established in Portugal in 2015. In Caldas da Rainha, approx. 1 hour's drive north of Lisbon, we set up another workshop for repairing boiler parts. This site has a far greater capacity than the Matzingen facility and incurs significantly lower cost. Production at Caldas da Rainha commenced at the beginning of 2017.

In 2014, we set up a joint venture in Australia under the name Martin biopower Pty Ltd to handle the Australian and New Zealand markets. Intensive lobbying has significantly increased interest in and acceptance of the thermal treatment of waste. Several promising projects are currently in progress.

At the end of March 2015, we entered new territory by signing a cooperation agreement with Thöni Industriebetriebe, based in Telfs (Austria). This was a first for us because we obtained the rights to a technology, and because this technology is completely different from the rest of our portfolio: the dry digestion process, which is suitable for treating biogenic waste flows to produce pipeline-grade biomethane and high-quality fertilizer for agricultural use. We signed the first contract at the beginning of 2017 in Tornesch (Germany), where an anaerobic digestion stage is to be integrated into the existing composting plant.

By acquiring 100 % of the share capital of Swiss company Explosion Power GmbH in January 2016, we succeeded in integrating a technology with much potential right at the beginning of the year. Since the company's foundation in 2010, Explosion Power has been developing boiler cleaning systems that remove tough incrustations from boiler tubes by means of shock pulses. The systems manufactured in the company's own workshop are marketed globally and greatly appeal to customers not only from the thermal waste treatment industry.

In November 2017, MARTIN and CNIM, our cooperation partner of many years, founded CNIM MARTIN Pvt. Ltd., a branch establishment based in Chennai, India. Based on licences by MARTIN for the reverse-acting grate EnviroPower, by CNIM for the heat recovery boiler and by LAB for a semi-dry flue gas cleaning unit, the company's purpose is to implement projects in India and Southeast Asia.

Shortly thereafter, in March 2018, we extended our portfolio to the treatment of sewage sludge with fluidized-bed incineration systems. To this end, MARTIN and KÜTTNER Holding GmbH & Co. KG from Essen founded KÜTTNER MARTIN Technology GmbH based in Munich. The company will market and build plants for the combustion of, primarily municipal, sewage sludge. The first contracts, for an entire plant to be erected in Bitterfeld and for supplying the fluidized-bed incineration system/boiler for a plant located in Bahrain, were signed in 2019 and are currently being handled.

In EBARA Environmental Plant Co., Ltd., we won over an experienced and competent cooperation partner for the Japanese market. The corresponding contract was signed in April 2018. Two very experienced plant manufacturers thus pool their expertise in the thermal treatment of waste in Japan to be in a position to market state-of-the-art plants. The new reverse-acting grate Vario technology therefore also finds its way onto the Japanese market.

In November 2019, we were able to reach an exceptional milestone: the contract to replace a MARTIN line for the Bazenheid plant in Switzerland marks our 1,000th combustion line. A remarkable achievement that was also made possible by our global network of long-standing partners and that makes us proud.

The transition from the 3rd to the 4th generation of the Martin family was legally initiated at the end of 2015, and operational responsibilities were handed over at the end of September 2016, when Mr. Johannes J. E. Martin began his well-earned retirement after more than 35 years in the company. 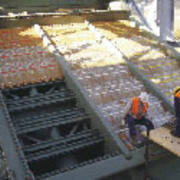